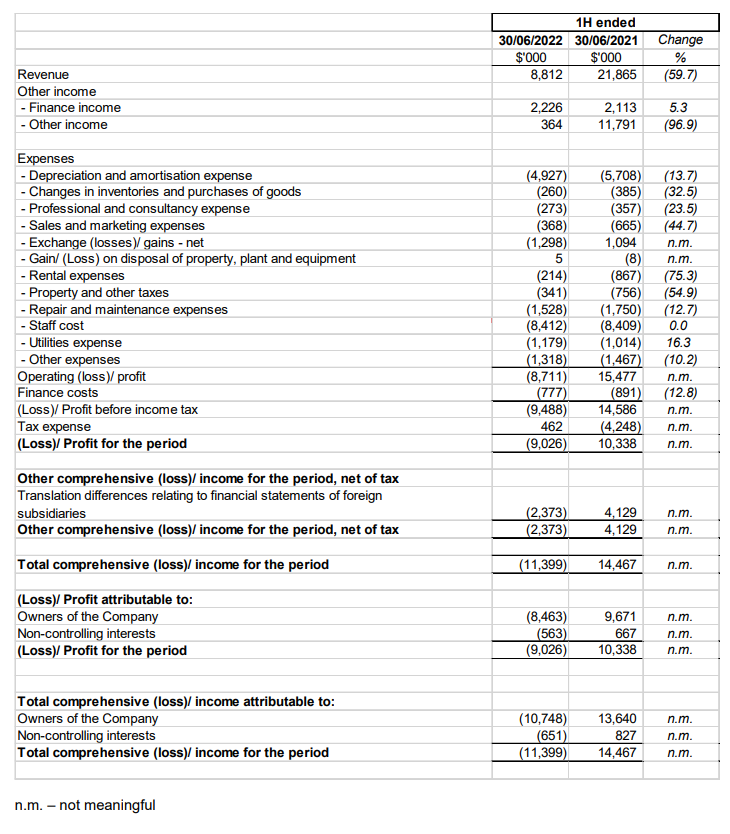 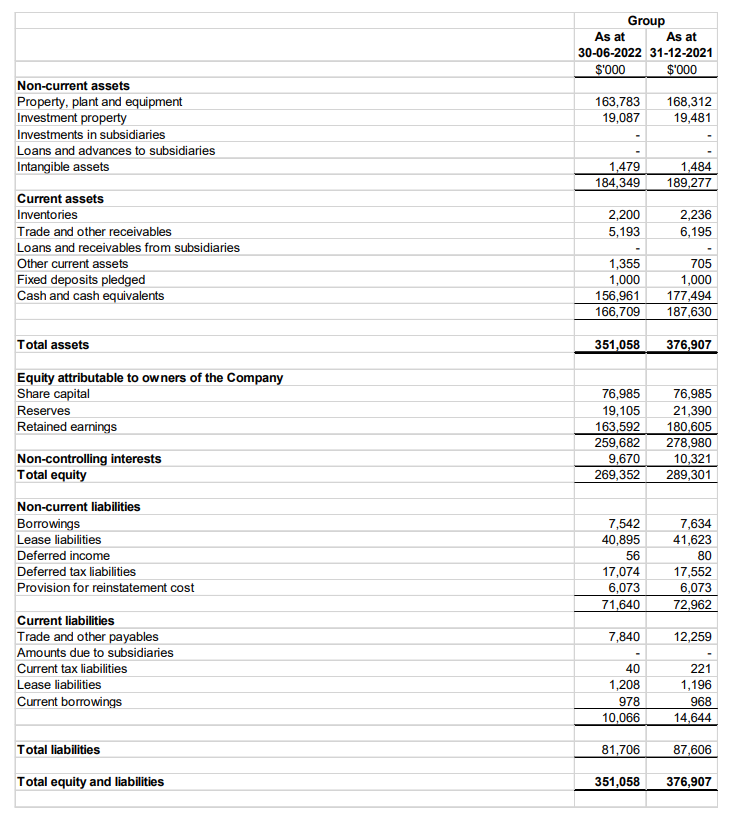 Review of performance of the Group

In the first half of FY2022, the Group generated revenue of $8.81 million, 59.7% lower than the corresponding period in 1H2021 as revenues from our three China attractions decreased significantly below 1H2021. Increased Covid-19 infections in China resulted in strict control measures being implemented, including protracted lockdowns in Shanghai, as the country is still enforcing a zero-Covid policy. Our flagship attraction, Shanghai Ocean Aquarium (“SOA”) faced prolonged closures since middle of March till end of June. Rides on Singapore Flyer were also suspended for about three months following the detection of a technical issue during a routine maintenance inspection, in compliance with the authority’s directive. There were no temporary closures of our attractions in 1H2021, albeit operating with safe distancing and preventive measures and capacity restriction in accordance with the authorities’ directive.

Overall visitation to all our attractions totalled 307,000 visitors for the half year, 65% lower than the corresponding period of 888,000 visitors in 1H2021; and slightly higher than the onset of the global pandemic in 1H2020.

Other income decreased significantly over corresponding period, in the absence of the arbitration award to Singapore Flyer for the insurance claim amounting to $10.4 million as in 1H2021, as well as lower amounts received under the Singapore government’s job support scheme and lower income from concessionaire sales, offset by higher interest income.

Total Expenses (excluding finance cost) for 1H2022 was $20.11 million, marginally lower than 1H2021. Exchange loss of $1.3 million was recorded in this period, as Renminbi weakened against the Singapore Dollar in the current period compared to last year-end exchange rate. Excluding the exchange losses/ gains in both periods, total expenses for 1H2022 would have been $18.82 million; 12% lower than 1H2021.

Depreciation and amortisation expenses decreased, mainly due to certain property, plant and equipment being fully depreciated. Retail and F&B cost of sales, and sales and marketing expenses were lower in view of the lower footfall. Rental expense decreased, mainly due to the much lower variable land rental at SOA as revenue generated in 1H2022 was significantly lower due to the temporary closure. Property and other taxes decreased 54.9% compared to 1H2021, mainly due to the significant reduction in annual value of our Giant Observation Wheel (Singapore Flyer), as revised by the Inland Revenue Authority. Utilities expense increased compared to 1H2021, due to rising energy cost.

Loss before tax was $9.49 million for 1H2022, as all our attractions reported losses for the period.

Other current assets increased 92.2% from $0.71 million at 31 December 2021 to $1.36 million at 30 June 2022, mainly due to increase at Singapore Flyer arising from increase in prepayment of insurance premiums for the yearly renewal in May 2022, progress payment for certain system upgrading and software development, as well as down payment for spoke cable assemblies and replacement works.

Trade and other payables decreased 36% from $12.26 million at 31 December 2021 to $7.84 million at 30 June 2022, mainly due to decrease in deposits from online travel agencies for the SRV scheme which were offset against trade receivables in current period and that the SRV scheme has ceased, decrease in deferred revenue upon SRV tickets being redeemed in the current period; decrease in variable land rental payable at SOA as no revenue was generated in the second quarter, as well as certain expenses accrued in last year has been paid in the current period.

The Group reported net cash of $7.44 million used in operating activities for 1H2022, compared to net cash generated of $6.75 million in 1H2021, in view of the losses incurred in the current period. Final dividend of 1.0 cent per share in respect of FY2021 was paid out to the Company’s shareholders in the current period, upon the passing of resolution at the AGM held in April 2022. Borrowings of $0.4 million was received by Singapore Flyer from its minority shareholder, being their share of 10% of the agreed shareholders’ loan quantum. Instalment repayment of borrowings and interest in 1H2022 totalled $0.53 million for the temporary bridging loan taken up by Singapore Flyer in July 2021, compared to the repayment of $1.34 million in 1H2021 for the term loan taken up in 2014 for the acquisition of Singapore Flyer. The term loan has been fully repaid in November 2021.

The National Bureau of Statistics of China reported that China’s gross domestic product (“GDP”) grew 2.5% year-on-year in the first half of 2022, dragged down by a slow 0.4% expansion in the second quarter from the same period last year, as the economy was affected by the Covid lockdowns. Shanghai, in particular, was in a two-month city-wide lockdown that stretched from April to June, resulting in a 13.7% contraction in Shanghai’s GDP.

Singapore’s economy grew 4.8% on a year-on-year basis in the second quarter of 2022, according to advance estimates released by the Ministry of Trade and Industry (“MTI”). On the tourism sector, the Singapore Tourism Board (“STB”) had reported that, with the reopening of borders under the Vaccinated Travel Framework since 1 April 2022, Singapore received 1.5 million visitors in the first half of 2022, compared to 119,000 visitors in the same period of 2021. As global travel picks up pace, and with a strong pipeline of events such as Singapore Grand Prix 2022, as well as new and rejuvenated offerings, Singapore expects to receive between 4 to 6 million international visitors in 2022.

As uncertainties remain for the Covid-19 situation in China and with the increasing risk of stagflation in the world economy, the Group will continue to closely monitor and manage the impact on its operations.